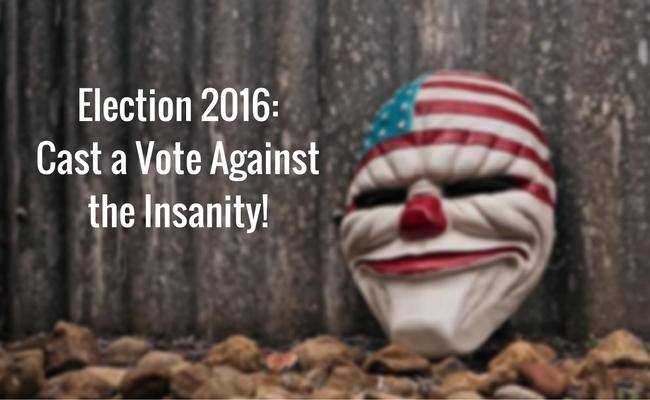 This election season has been a bleak commentary on just how far removed too many among us are from social, racial, gender, and humanitarian enlightenment!

For me, General Election 2016 has absolutely nothing to do with the important issues.

Tomorrow, Tuesday, November 8, 2016, I am not voting the issues. No, I am voting for the saner, the more humanly decent, the less petulant of the two candidates running for President of these United States and political leader of the free world.

Because I simply cannot bear the thought of a spoiled and corrupt and indecent and predatory and punitive ‘four-year old” brat in possession of the keys to the Oval Office and its inherent power and influence.

Why? Because I know how short our memories are and how complacent we’ve have become.

And how easy we could be convinced again that it is “right” to build another wall (remember The Berlin Wall); objectify, devalue, and assault women; torment those whose sexual orientation we deem an abomination; and enslave others or send them to the gas chambers.

Postscript: And if you are black and you are voting for that spoiled, corrupt, indecent, predatory, and punitive “four-year old” brat who has been endorsed by the KKK, then you are nutty as a fruitcake, profoundly absurd, and in dire need of an intense refresher course in black history in this country! Ugh!

Other observations you might enjoy: It Was Independence for Some and Are You Profoundly Absurd?!

8 thoughts on “Tomorrow, I Cast a Vote for Her!”