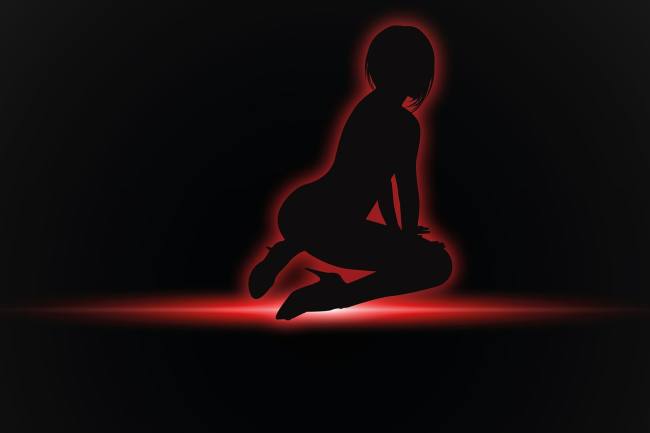 Am I cuckoo? Because I am feeling cuckoo and more than a tad bit nauseated too!

Why is that Food Network chef—you know, the woman everyone thinks is so beautiful—wearing a very body conscious, white dress and making like “sexy” as she lies in a pool of marinara sauce?!

Why is a famous, really famous, Academy Award-winning actress known for her very pouty lips wearing nothing but that pout and a naughty sliver of silk?!

Can it get any worse?!

Why is Food Network’s Ms. EVOO wearing nothing but a bra, a tiny red and white gingham apron with pink bows, and red heels as she removes the Thanksgiving turkey from the oven? And why is she up on the white tiled kitchen counter in hot pants—yes, hot pants—all sudsy and giggly?

Why is there a life-size poster of a rap diva with all three assets on display: back arched and arse out, boobs in your face, and her painted, pouty lips suggestively parted?!

This at my local mall: Kids, impressionable kids, go to the mall.

Okay, I am about to upchuck my breakfast, second breakfast, and lunch, so I will stop here.

The descriptions above are just a few of the unfortunate, au courant images from the covers and/or pages of popular men’s magazines.

A truly powerful woman has nothing to prove and no desire or need to undress herself in public simply for random male viewing pleasure.

Unsurprisingly enough, I have NEVER seen any handsome, successful, rich man featured on these same magazines naked, with an open crotch, with suggestively parted lips, or with the infamous arched back and arse shot. And they certainly do not slosh in food–that would be ridiculous, right?!

So, why are women who are considered beautiful and successful and rich willingly getting undressed for these types of photo ops?

Is it vanity? Is it insecurity? Some deluded sense of power?

Where is the power in the centuries old male game of female objectification?

How is a woman powerful who needs to be always seen as indiscriminately fuckable?

Where is the power in looking like a submissive, fuckable, blow up doll?

What does it say about a woman whose dignity and sensual mystery is for sale, especially when she doesn’t even need the money or the exposure?

Yes, these women may be getting paid, but they are not in control.

Too many women have drank the spiked Kool-aid that they can express themselves in any way they damn well please, but the truth is: A truly powerful woman has nothing to prove and no desire or need to undress herself in public simply for random male viewing pleasure.

On the other hand, an insecure woman searching for daddy’s or any man’s approval, well, that another story…

Call to action: Am I cuckoo? Are you feeling cuckoo too?

Below are links to related articles written by other people that make very good sense: