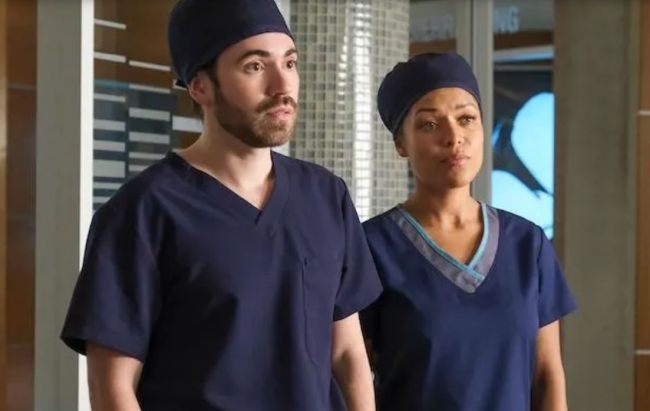 And fail to hold the stupid, the unthinking, and the evil accountable

On April 26, 2021, The Good Doctor, an ABC medical drama, aired Season 4, Episode 15 “Waiting.” This episode dealt with current social and political issues. The storyline involves two mothers Carina and Taryn and their young sons Mason (9 years old) and Ethan (8-1/2 years old) who were on opposite sides of a fictitious and undefined Prop 266 protest. As they’re marching in the protest, both boys are critically shot by drive-by cowards. They’re rushed to the prestigious San Jose St. Bonaventure Hospital.

Over the course of the episode, the boys’ lives swing precariously between life and death, their anxious mothers waited, squabbled, and then supported each other. But what I found even more compelling and interesting was the conversation between three of the main characters. This conversation provided a backdrop as the horrific story of these two sons and their mothers unfolded.

Let’s introduce the main characters who participated in this conversation:

Your views reveal your character

CLAIRE: It’s so sad that people can’t express their views peacefully. The right is so intolerant of political differences — any differences.

ANDREWS: I think there is some intolerance on both sides.

CLAIRE: Oh, like there are good people on both sides.

Yes. Andrews’ point is a valid one . There are intolerances on both sides. However, this is typically the stale, non-committal position stated when we’re trying not to offend and pretend that some political differences aren’t intolerable.

But Claire’s truth is real, unapologetic, and valid too.

Yes, there are “good” people on both sides. But “good” in this context is more precisely defined as people who give the appearance of “goodness” and/or people who aren’t “good” enough.

While it’s civilized and potentially productive to listen to the views of others, how long do we entertain destructive and intolerable differences that interfere with entire human group(s) breathing and thriving?

When do we get to decide to stop participating in endless dead-end conversations about the worth of other human group(s), pick a position, and throw out the intolerable rubbish?

Fact is, we have been “talking” for decades, centuries even. We’ve had more than enough time to do the right thing by everyone. We haven’t. We won’t. It’s time to constructively offend and “force” the hands of change.

ANDREWS: What if I told you I belong to the NRA?

CLAIRE: I’d think you were saying that to make a point.

ANDREWS: About five years ago, my wife and I went to a very trendy restaurant in a very shady part of town. And on our way back to our car, we were mugged at gunpoint. The next day I bought us both handguns. I’m a card-carrying member.

Look, if you’re comfortable with guns, there is nothing wrong with buying a handgun to protect your life and the life of those you love against evil, criminal-minded people.

But I don’t buy that Andrews had to “leap” to becoming a card-carrying member of the NRA.

Andrews, maybe you could avoid frequenting “very trendy restaurants in a very shady parts of town?!” Maybe you could buy a handgun or two and not become a card-carrying member of one of the most powerful and evil lobbyists in Washington, D.C.?!

Keep your Second Amendment right to keep and bear arms.

But what about all of our rights to work, dine out, shop, study, and enjoy our lives without fear of meaningless death and loss at the hands of lunatics armed with an arsenal of assault weapons?!

Why does any civilian citizen need an AR-15 style rifle or any other assault weapon? And why do they need an arsenal?

Lorazepam is a tiny pill about the size of a baby aspirin. It’s considered a controlled substance, but an AR-15 Style rifle is not subject to control.

Further, how are Second Amendment rights infringed upon by asking for thorough background checks and accountability from any individual wishing to buy assault weapons that can destroy human lives en masse in a matter of seconds or minutes?!

Frankly, I tire of NRA’s nonsense position on gun control. Their position is bobbing in a bloody ocean filled with the shattered hopes, dreams, and bodies of dead victims. Human beings who died violent deaths. Because lunatics were able to buy an arsenal of assault weapons with little or no accountability.

Humanity, Isn’t It Time to Grow Up?

ASHER: I voted for T***p… I liked his stand on Israel. But I’ve never told anyone because I would be absolutely vilified.

CLAIRE: As you should be, especially you. You actually voted for T***p.

CLAIRE: And then what? You — you — you suddenly discovered he was exactly who he said he was?

CLAIRE:
This kind of changes how I feel about you.

ASHER: What does that mean? You mean you don’t respect me? We can’t be friends because of a vote?

CLAIRE: It’s more than a vote.

ASHER: Yeah. It’s a fundamental right that I exercised. This kind of changes how I feel about you. If I can’t have a political opinion about the best way to improve all of our lives —

CLAIRE: Do you think anybody’s life got better?

The 2016 and 2020 election seasons were never about political policies. They couldn’t be. Once that evil, narcissistic egomaniac threw his hat into the ring, these elections became about so much more than political ideology. T***p turned these elections into a war between right vs. wrong, good vs. evil, sanity vs. insanity.

T***p never hid his total disregard for any human life who does not look like him and/or does not support his insatiable appetite for attention, dissension, and money.

T***p spewed racist tripe whenever he could, making white supremacists and other like-minded crazies feel embolden.

T***p called brown people rapists and murderers. And swore to build a wall to keep the immigrants south of the border out. (But it was OK for him to bring immigrants from Eastern Europe into his bed, this country, and the White House.)

T***p snickered — and we all heard him — why he could grab women’s private parts without their prior consent.

T***p denigrated women based on their looks.

T***p made sexual statements about his daughter.

T***p claimed that he could murder someone on Fifth Avenue and get away with it. (We scoffed. He was right.)

T***p played footsies with our global enemies to undermined our election process and our very democracy.

T***p had/has been running cons and grifts his entire life up to and during his first election bid for leader of the free world.

And so much more.

And Asher still thought it was a good idea to vote for this man. Because he liked his policy on Israel. In other words, frack the well-being of ALL the other human groups mentioned above, as long as Israel rises like a Phoenix from the ashes.

So, Asher, I respect your right to make stupid and selfish choices. Now respect my right to choose NOT to be friends with anyone who votes for evil politicians — for the same reasons that I don’t want to be friends with drug dealers, bank robbers, rapists, and murderers.

ASHER: So, you agree with Biden on every single issue?

CLAIRE: No, of course not. But I agree with him on more than one.

ASHER: How many? And where’s the line? Every vote is a compromise. We support the things we think are important and rationalize the things that aren’t. Unfortunately, compromise has become a dirty word, which is ironic, since that is the essence of democracy. The lack of compromise is why I left home.

Asher’s argument is weak and beneath such an otherwise intelligent character.

How does a political leader’s policies impact the lives of ALL the human groups that breathe air and occupy space on our planet?

So, Asher, you should be ashamed of your vote. And please don’t whine if you’re held accountable for your selfish choices in the voting box.

Because truly intelligent, good people do not EVER rationalize voting for evil, narcissistic egomaniacs who threaten to undermine and destroy all that is the best of us and any human group who doesn’t look like them.

And as for Biden, he is an evolving, imperfect, but fundamentally good human being. And that’s the point.

Right Back into the Endless Loop

CLAIRE: Buy you a cheeseburger?

CLAIRE: Hm, well, I figured we should talk.

At this point, I’m all out of sighs to give.

Honestly, maybe Asher had a change of heart. I like Asher. He claimed he only voted once for T***p. Still, he did earlier in the day make stupid defensive arguments to Claire like this:

So I’m not convinced.

However, by the end of the episode, Claire was sucked right back into the endless loop of dead end conversations we’ve been having for decades.

But isn’t this the fairytale ending most people want, especially those wanting desperately to maintain the status quo?!

As for me, I believe anyone who voted for T***p voted against me and most of humanity. And there is no way, I can rationalize that away.

So I’m still not interested in sharing a “cheeseburger” with anyone who voted for T***p!